Shahid Kapoor and Mira Kapoor’s adorable display of affection for each other on social media is quite frequent, and fans just can’t have enough of them. More often than not, the couple are seen sharing happy pictures and memories on their Instagram handle. Speaking of which, Shahid recently acknowledged his lady love with this romantic gesture! The ‘Jab We Met’ actor shared a bouquet of flowers for his wifey. Have a look :

On receiving the flowers, Mira shared a picture on her Instagram handle and added a little note which read, ‘That’s how you melt my heart. ❤️❤️❤️ @shahidkapoor I love you 💋’. On expressing her love for Shahid, he immediately reverted and wrote, ‘No amount of flowers will ever match up to your fragrance my love’ 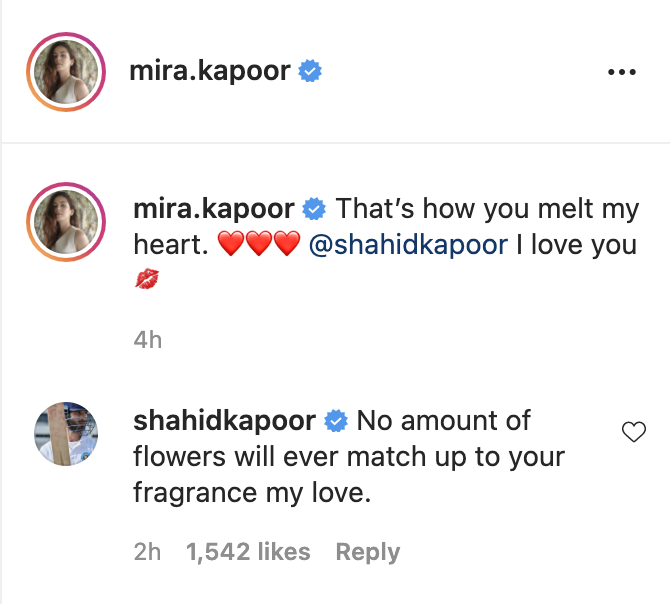 Married to Shahid Kapoor in 2015, Mira has also acknowledged that her last five years have been wonderful in all aspects. She is one of the most celebrated star wives of Bollywood.

On the work front, Shahid Kapoor will next be seen in ‘Jersey’. The actor has wrapped up the shooting schedule of the film. In the movie, Shahid would be essaying the role of a cricketer, which is a remake of a Telugu film by the same name. The film will also feature Pankaj Kapur and Mrunal Thakur in pivotal roles.