Recently, ‘The Family Man’ actress Samantha Ruth Prabhu reacted to Priyanka Chopra roasting husband Nick Jonas. The South star reshared the video in which PeeCee roasts her husband on a show for an OTT platform.

The video featured Nick, Priyanka, Kevin and Joe Jonas. Taking to Instagram Stories, Samantha shared a clip posted by Priyanka Chopra from her official handle. She added an ‘amazing!’ sticker to the post.

In the video, Chopra said, “I’m honoured and so thrilled actually and tickled to be here tonight to roast my husband, Nick Jonas, and his brothers whose names I can never remember. I’m from India a country rich in culture, music and entertainment. So clearly, the Jonas brothers didn’t make it over there.” 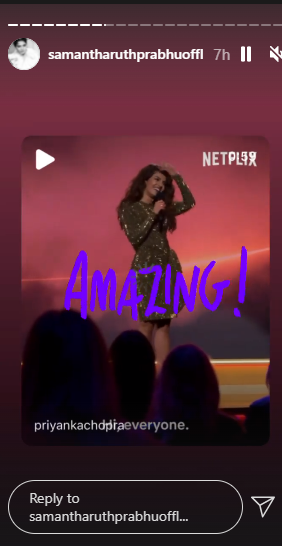 The actress also spoke about the age gap. She said, ”Nick and I have a 10-year age gap. Yes, we do. There are many 90s pop culture references he doesn’t understand and I have to explain them to him. Which is fine because we teach each other. We teach other things. He showed me how to use Tik Tok for example. You know, and I showed him what a successful acting career looks like.”

Recently, the actress was making headlines after she removed ‘Jonas’, her second surname, from her social media platforms.