Kangana Ranaut is currently shooting for multiple projects. On Monday night, the actress was seen gracing an event in Mumbai where announced the release date of her upcoming film ‘Dhaakad’. The action entertainer is set to release on April 8, 2022. Kangana shared the update on Instagram with a cool picture.

The picture features different looks of Kangana from the film. It looks like her looks have left Samantha Ruth Prabhu mighty impressed.

Kangana shared the post with a caption, “She is fierce, feisty and fearless. #AgentAgni is all geared up to set the big screen on fire

. Bringing to you the action spy thriller #Dhaakad that will hit theatres on 8 April 2022!” To this, Samantha dropped multiple fire emojis in the comments section. Have a look: 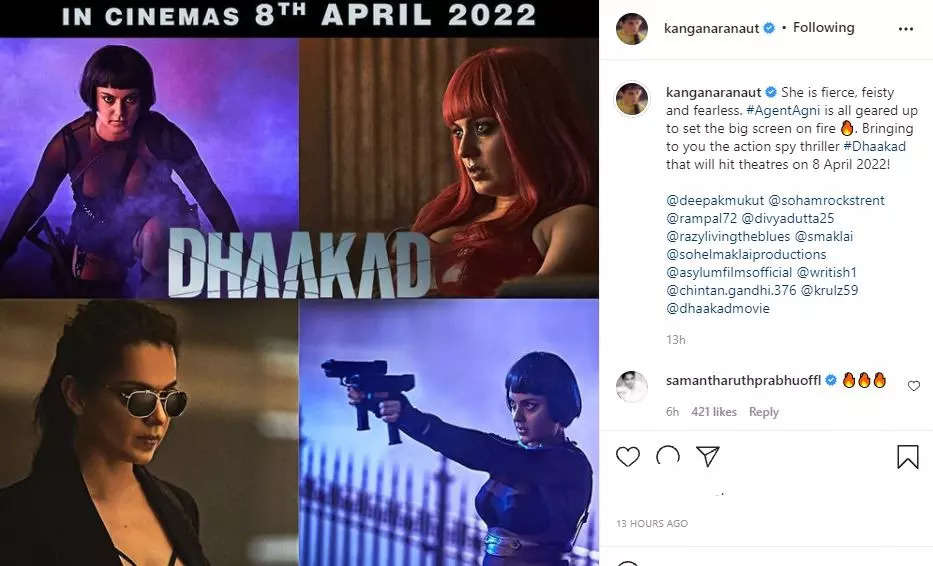 Meanwhile, Kangana had earlier commented on Samantha and Naga Chaitanya’s separation news. Taking an indirect jibe at Naga and Aamir Khan, she had written, “The South actor who suddenly divorced his wife was married for 4 years and in a relationship with her for more than a decade recently came in contact with a Bollywood superstar who is also known as Bollywood divorce expert… Has ruined many women and children lives is now his guiding light and agony aunt. So it all went smoothly… This is not a blind item we all know who I am talking about.”

‘Dhaakad’ also stars Arjun Rampal and Divya Dutta in key roles. Speaking about the film, the actress shared in a statement, “Dhaakad is the kind of film that’s best relished on the big screens. It’s a deeply stirring subject and we have made it on a scale that only theatres could do justice to. The layered story at the heart of it needs to reach out to the masses and I am certain, the film will speak to women across the board. I can’t wait for the audience to meet Agent Agni on April 8.”