Veteran actress Neetu Kapoor is an avid social media user. She is often seen sharing lovely posts on Instagram. On Sunday afternoon, the actress took to her Instagram story and shared an unseen picture with Alia Bhatt, who is currently in a relationship with her son Ranbir Kapoor.

Alia and Neetu get along really well and their social media posts are proof. In the picture, Neetu can be seen sitting next to Alia and the ladies are busy flashing their million-dollar smiles. The veteran actress has penned a birthday wish for Alia’s team member and it is all things sweet! Take a look: 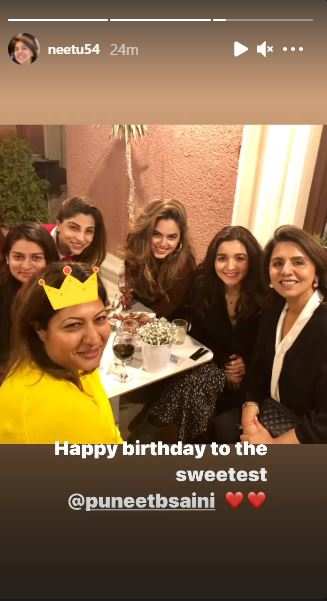 Recently, Neetu posted an adorable family picture that featured Ranbir, Riddhima Kapoor Sahni, Samara and Alia. She shared the picture along with the caption, “My world 🌎”

Earlier in an interview, Ranbir had officially confirmed that he would have married Alia if the pandemic had not hit. Recently, Riddhima opened up about her mother and revealed that she would treat her daughter-in-law like a queen. She further said that Neetu is a super chilled personality, she will not be an interfering mother-in-law and will give her daughter-in-law and Ranbir their needed space since she values her own.

Meanwhile, Neetu is all set to make her comeback with ‘Jug Jugg Jeeyo’. The film also stars Varun Dhawan, Kiara Advani and Anil Kapoor. On the other hand, Alia and Ranbir will be seen coming together for the first time in ‘Brahmastra’. The film also stars Amitabh Bachchan and Mouni Roy in key roles.