Mukesh Khanna is the latest celebrity to slam Kangana Ranaut‘s statement that India’s freedom in 1847 was ‘bheekh’ (alms). In a lengthy note penned on Instagram, the actor called it ‘ridiculous and childish’ and wondered if it was a side effect of the Padma Award‘ that the actress recently received.

Taking to Instagram, Mukesh Khanna wrote a long note in Hindi which read, “Many people have been telling me time and again that you have not commented on the sarcasm made on the independence of the country. Why?? So let me tell you. I have given. But maybe it was not read. So I thought I should say it publicly. According to me, this statement was childish. It was ridiculous. It was inspired by flattery. I don’t know if it showed ignorance or was a side effect of the Padma Award.. But everyone knows this and also believes that our country became independent on August 15, 1947. Even trying to dress it differently would be nothing short of foolishness for anyone.” 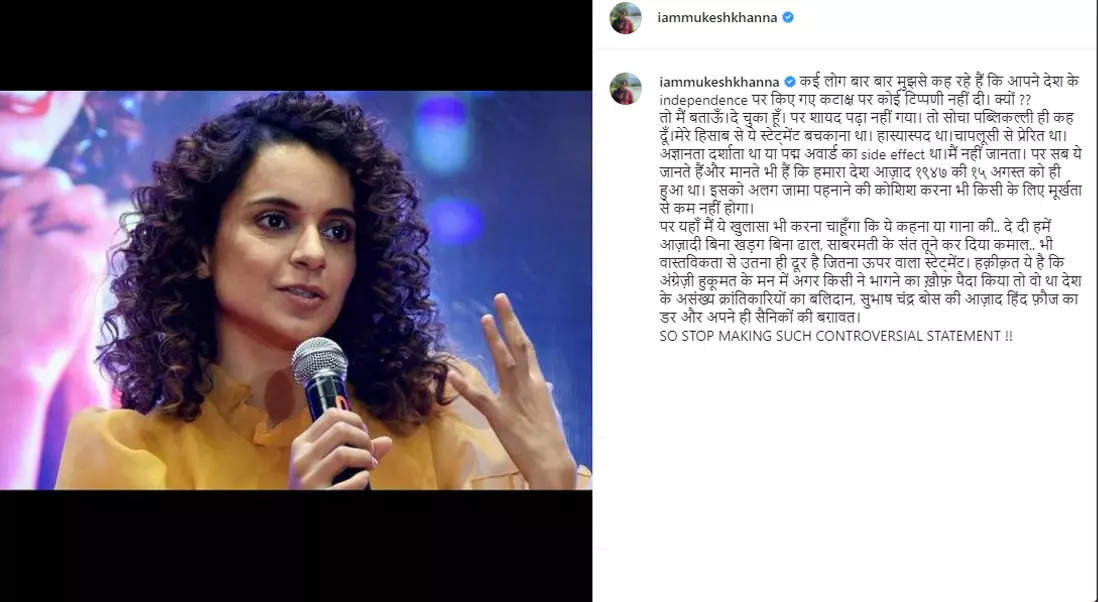 He further added, “But here I would also like to disclose that whether to say or sing it..
De di hume azaadi bina khadag bine dhaal, Sabarmati ke sant tune kar diya kamal.. is as far from reality as the above statement. The reality is that if anyone created the fear of running away in the mind of the British government, it was the sacrifice of numerous revolutionaries of the country, the fear of Subhas Chandra Bose’s Azad Hind Fauj and the rebellion of their own soldiers. SO STOP MAKING SUCH CONTROVERSIAL STATEMENT!!”

Recently, an FIR was lodged against Kangana Ranaut for her alleged statements, calling the farmers’ protest as the ‘Khalistani’ movement. On the complaint of Amarjit Singh Sandhu, member of Sri Guru Singh Sabha Gurdwara Committee (SGSSGC), Dadar, Mumbai, the actress Kangana was booked under Section 295-A (deliberate and malicious acts, intended to outrage religious feelings of any class by insulting its religion or religious beliefs) of the Indian Penal Code (IPC) at Khar police station. In the said controversial social media post, Kangana had stated, “Khalistani terrorists may be arm twisting the government today. But let’s not forget one woman. The only woman prime minister ne inn ko apni jooti ke niche crush kia tha (The only woman prime minister crushed them under her shoe) No matter how much suffering she caused to this nation… she crushed them like mosquitoes at the cost of her own life… Lekin desh ke tukde nahi hone diye (but didn’t let the country disintegrate) even after decades of her death aaj bhi uske naam se kaampte hai yeh inko vaisa he guru chahiye (even today, they shiver at her name, they need a guru like her).”