Cannes is back with sparkling celebrity looks


Oh, holy chic! Emerging out of the post-pandemic, dolled up and dapper, these dazzling courtesies are from the 74th Cannes 2021 film festival. It was a getaway week from the lockdown life, where all things glamorous brought out their A-game – the pop of vibrance, the mesmerism of pinstripes, the gleam of metallics, the edgy buoyancy of clean-cut jackets, ruffled razzmatazz, feathered silk crystals, and the most exquisite jewels on beautiful silhouettes ditching the unduly stretching authority of loungewear. Everyone had cleaned up real good and it goes to show that that’s where the actual power lies. 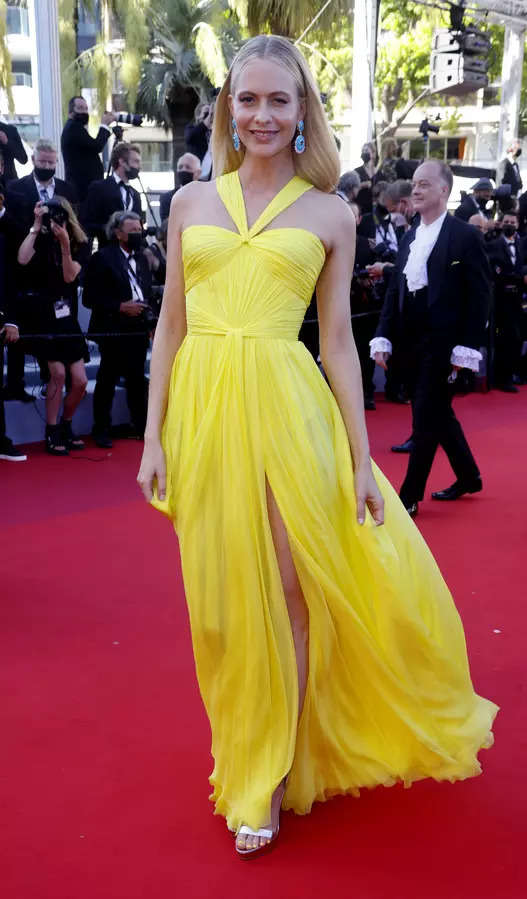 Our favourite celebrities and fashion icons gave us major style goals this season hinting that the next celebration in life could be just around the corner, and it is high time to get the biggest post-pandemic boost to top it up. Whether it’s films or fashion, all icons were perfectly star-studded on the red carpet at the Cannes Film Festival for its 74th edition. Meanwhile, the rumours of a possible “Cannes Cluster” were circulating over the appearance of the James Bond actress Lea Seydoux – who was double vaccinated and asymptomatic, and tested positive for Covid-19 prior to the event. This French beauté, who was appearing in four films at the world’s most famous movie festival, had to unfortunately give it a miss to respect strict protocols at the French Riviera and to avoid infections for others.

Film fraternity without the masks

This glamorous event kicked off just before the 3rd wave of the virus had begun to hit. Nevertheless, this year’s opening film Annette amplified the sparks with the leading actors Adam Driver and Marion Cotillard coming together along with the musical duo Sparks. The celebrities showed off their star-studded appearance, however, there was less-than-desired social distancing happening on the red carpet.

And then, the ‘no kissing’ rule was immediately flouted on the opening night by the Festival President Pierre Lescure. Commanding a 5-minute standing ovation at the Palais des Festivals, the actors of Annette showed genuine excitement for the next release.

Spike Lee was seen in his neon, bright pink attire, bringing the olden dandy culture back to Cannes. He is the first black man to head the panel of the jury, and he closed the festival with a bang, looking the epitome of confidence in his custom Louis Vuitton suit with Air Jordan 1s.

Adrien Brody looked his best and at ease from the competition wearing a dashingly dapper suit from Dior to endorse his upcoming film “The French Dispatch”. He was seen taking some time off of discussing about films and was talking more about the festival’s uniquely welcoming creative atmosphere, his association with the upcoming exciting ensembles, and his fondness for Kim Jones’s specially designed ‘Tailleur Oblique’ black tuxedo. The Norwegian starlet Renate Reinsve had all eyes trained on her dress by Louis Vuitton. She took home the award for the Best Actress in “The Worst Person in the World”. Her gown was exclusively embroidered and she styled it with pieces from the LV High Jewellery collection.

Another sensational debut that was done right was by Poppy Delevingne looking all mellow-yellow in a stunning Dolce & Gabbana chiffon gown, flaunting the beautiful sparkle of Chopard earrings.

Being dubbed as ‘A Modern Cinderella’ by Chopard was none other than Amy Jackson, making it huge in Bollywood and the most favourite South Indian movie muse. She was a striking vision on the Cannes red carpet in a textured burgundy dress accented by Chopard’s diamonds.

The iconic Jessica Chastain can never go boring, and Cannes made up for the last year’s missed moments with her. Amidst the tumult of the red carpet, she felt inimitable in radiant rubies, also by Chopard.

Fashionistas bring it back


The closing night glam at the French Riviera made the whole landscape extremely memorable where the best of fashion glittered in the front of the crimson sky, and palm trees swayed in the background of French balconies showing crystal blue water. For some of the most sensational breakdown of outstanding looks we must go in reverse, from the beginnings.

Bella Hadid claimed her Cannes Film Festival power back by making an impact in a sultry yet elegant style, bringing her signature feminist glam in a vintage Jean Paul Gaultier form-fitting dress with a black tulle cape and matching bodice from the Designers Spring 2002 collection. However, that’s not it. Hadid marked her fashion statement at the screening of “Three Floors” wearing a black, long-sleeved, wool crepe dress with a low-cut neckline and a gilded brass necklace in the shape of Trompe L’oeil’s lungs from Schiaparelli’s recent Fall 2021 Couture collection that debuted early in this month. It was a bold-&-gold powerful piece covering her bare bustline, her sharp high-chick bones with defined eyes were accentuated with neatly tied up hair.

Candice Swanepoel looked divinely serene in Etro, in a nude, crystal bodysuit with silver sparkles, so was her other eye- catching Etro creation – a white halter neck gown making her look like a goddess of power.

Another glamorous Etro muse was Taylor Marie Hill, looking like a complete catch in a black see-through gown, along with Adèle Exarchopoulos bringing forth a plain yet strong vibe while flaunting Fendi in off-white.

The youngest and the most popular vegan & fashion beauty Leonie Hanne packed her healthy lifestyle from her German genes, showing off some major looks at Cannes. She carried off multiple designer ensembles, stealing the finale look in a Georges Hobeika gigantic golden gown, closing the glamorous 74th Cannes Film Festival with a perfect pout and a sun-kissed smile.